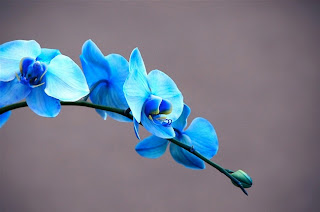 The British poet, James Montgomery once wrote, “Blue thou art, intensely blue; Flower, whence came thy dazzling hue?” Do you think Montgomery knew that one day we would have a mystique-ingly blue Orchid?

I was on a hunt for one of these babies since I promised the world's first Phalaenopsis ‘Blue Mystique’ Orchid to a very dear veteran friend, General Don for his birthday. This World War II veteran was tickled pink about adding a blue orchid to his collection. We like to give the General indoor plants for special occasions to keep his green thumb active. However, after a fruitless search, I regretfully told Don that I wasn’t sure I could ever get my hands on one of these orchids. But here is where the story brightens up. Just yesterday, months after his birthday, Don left a message saying that he saw the blue orchids. You guessed it, the local Home Depot. So before the day was through, I made my trek to the box store, not knowing what to expect of this long-awaited pursuit. I spotted the orchids and there it was - a big wow of blue!

Some call it tacky; others say it is an abomination while Europeans consider this chemically induced blue Phalaenopsis quite the rage. For those enchanted by the royal blue of Delphiniums, you will absolutely fall in love with this orchid. But here’s where it gets tricky. Because it is a treated white orchid, future flower spikes are said to revert back to its original form, which is white. The blue is more of a fleeting moment then a reality but I can’t tell General Don that it won’t stay blue. He had on a royal blue shirt when he met me at the door. His blue eyes sparkled with delight, knowing he finally had his prized blue orchid. So the moral of the story is, that even if it is mystique-ingly blue, when you are patient, good things come even if they don’t last forever.

Image of Phalaenopsis ‘Blue Mystique’ Orchid from the Internet

If you like this blog, remember to post and become a friend on our fan page at http://www.facebook.com/abilowz or follow me on twitter http://twitter.com/annbilowz (where there are even more shared tidbits) or subscribe on the blog to receive posts daily via email or a feed. Either way, we hope you follow the postings somewhere in cyberspace and share it with your gardening friends. Questions, comments or thoughts, contact me direct at annbilowz@gmail.com Happy Gardening. Annie
Posted by Unknown at Thursday, May 19, 2011