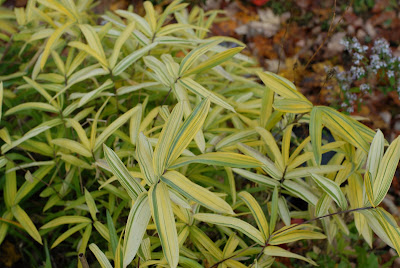 After taking a quick peek at the morning news, it dawned on me that I must be living under a rock. One of the latest ‘green’ fads is bamboo underwear. Sounds a bit scratchy but I thought it would be an interesting plant to talk about in today’s blog.

Bamboo is a member of the grass family, Poaceae. It is considered one of the world’s fastest growing woody plants. This versatile species is used daily in Asian cultures for a myriad of things including construction. Most varieties, referred to as "running" (monopodial) are invasive and spreading but there are a few delicate "clumping" (sympodial) forms that behave themselves. Although not all species can survive our New England temperatures, there are a number of cold hardy varieties.

Ornamental Bamboo has an exotic texture and character. Be careful when planting and experimenting with Bamboo in your garden. Make sure you know what form you are planting. Once it gets established, Bamboo is very difficult to eradicate. In our own garden, the low-growing variegated bamboo we thought would stay contained has managed to creep its way into one of our borders. The taller bamboo varieties can be used for screening and/or a fencing system. Some make an impenetrable thicket.

I’m still not convinced I would try the bamboo underwear. Maybe I’ll just stick to drying my clothes on the line to be ‘green’. The inspirational thought for the day is by an unknown author. “Getting over a painful experience is much like crossing monkey bars. You have to let go at some point in order to move forward.” Don’t forget to post your comments - eager to hear from the ‘grass shorts’ fans.
Photo of bamboo growing in our own garden - Photo by Greg Bilowz