Two lines from Louise Lewin Matthews’ poem, “Stately lilies pure and white, flooding darkness with their light” make this dreary, rainy morning sparkle with hope. Soon to be upon us: sunshine, chocolate bunnies and fragrant Lilies. Now it’s time for an Easter Egg Hunt of answers. Did you pass the test?

2.) Prior to 1941, Easter Lily bulbs were exported into the United States.
True – Although these hybrid Lilies were first grown on the coastlines of Oregon in 1919 as a hobby, it was not until 1941, when the Japanese attacked Pearl Harbor that these hobbyists’ gardeners opened up shop and began commercially producing these sought-after bulbs for the United States and Canada.

3.) Easter Lily bulbs are harvested in the fall.
True - During late September and early October, the lily bulbs are dug, prepared and shipped to greenhouses across the U.S. and Canada. It is there these vigorous bulbs are forced so we may receive sweet-smelling trumpet flowers by Easter.

5.) Easter Lily bulbs are cold hardy and can be planted in the ground.
True – my mother always planted her Easter Lilies outside (Zone 5) and these bulbs would produce flowers the following year. There are a few tricks to getting your Lily to survive cold temperatures but if you provide proper winter mulching that is removed in the spring, you should be able to get new flowers when the warmer temperatures arrive on your doorstep. However, one problem plaguing this region is the very destructive Lily beetle that has been decimating these and other Asiatic Lilies.

That’s the nitty-gritty on Easter Lilies so when you see them at the garden center, grocery store or florist, think about this bulb’s long journey and what is involved in producing its graceful white flower. Due to an emergency broadcast test to the system, I’ll be back posting on Thursday. But before I sign off, here’s the one-liner inspiration from the internet to get you in the mood for the Holiday gathering. “Hospitality: making your guests feel like they're at home, even if you wish they were.” Don't forget the chocolate bunnies. 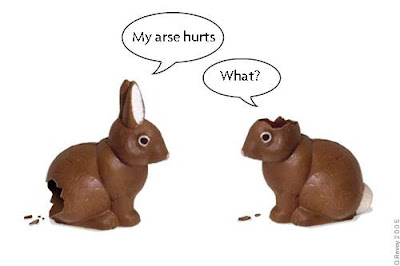